Whoa........I (Mary-Anne) did 19 cross races this year!! Including the early season DFL cross dress series! I guess I sort of geeked out!

I had too much fun, I loved meeting new people and seeing them week after week. I really loved all the cheering and encouragement from Rick and his friends and even complete strangers. You just don't get enough of that sort of thing in your daily life. Cross is a good thing when you're a rookie.

A year ago Rick was still showing me how to get in and out of my pedals, and I thought that I would never want to race a bike! but now I'm encouraging everyone I know to try it. "It's easy" I say. "Well no..... it's really hard, but the people are super nice, so it's not that scary!" I think I have even convinced some of my Canadian friends to try.

Sunday was my last race and it was bittersweet. I was really tired from the ride the day before and I probably should have been a beer drinking spectator, but I was talked into it. I took a wrong turn on the course and went down a hill, which I had to climb back up in order to get back on the course....twice......in the same place! I was so embarrassed (that scenario was similar to the nightmares I had prior to my first race!!) I wanted to quit but it was a really fun course, and the last race, I had to finish!

Here's some pictures I stole from the SCCCC team page

The nasty run up at the Watsonville Fairgrounds. 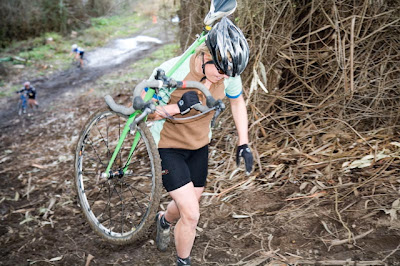 The slippery S turn and my first race with drop bars!! 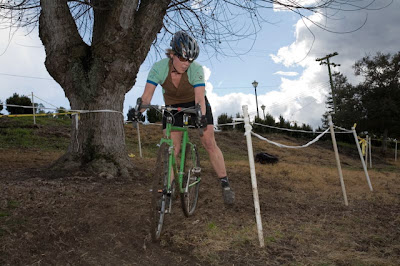 James from the Freewheel took the S turn with a lot more grace than I....... on his fixed gear!!! 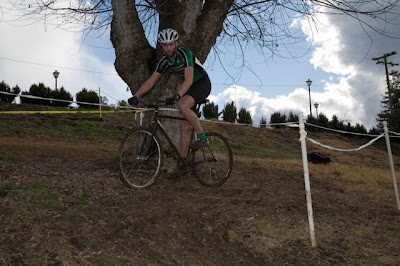 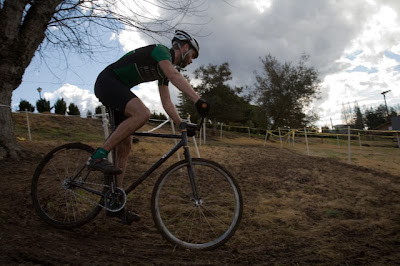 I am already looking forward to next year!!!
Posted by Hunter Cycles at 6:58 PM

So next up, the County Line then the 1st Grasshopper. You're doing both right?

Allison,
For Sure......
I just need to turn my Mountain bike into a single speed.
Just a little over 2 weeks until the County Line!!
See you there.

Wow. I thought I was all nutso doing 15 races, but I missed all the dfl's (I'm afraid of boys in dresses). You're truly a Gnar-Shredder.

Hopefully Brue and I will get down your way mid-week soon to go on one of Rick's off-road adventures.

Much fun hanging out with you kids this season. Thanks again for the hospitality on the weekend of mud.

The meeting time is noon?

Mary-Anne,
I think nobody looks happier while suffering than you. Great job this season!

Hey Allison,
Yes meeting time is noon. We should have a little flyer out soon.
It's a potluck!!

you were awesome this season. congrats!

after doing a few of them, it'd be easy to make a wrong turn....