Folks have been emailing and calling to ask for more information on how Ricks doing. I guess his updates to the official GDR voice mail have been "boring" according to some people. Typical Rick, all business...
I've been talking to him on the phone and things are going well for him considering this is probably the hardest thing he has ever attempted.
He's gotten lost a bunch of times,which means he's had to do a bunch of back tracking. He lost his map on a highway somewhere, and had a stroke of luck when a mechanic at a bike shop helped him find it.
There's been rain, snow, hail, massive winds, and there's a heat wave.
He says that the hardest part is dealing with the saddle sores. He's been putting in some huge days, 2 days ago he rode 165 miles. Yesterday he sounded tired, but who wouldn't. I have a feeling that along the way there will be days that are the worst he's ever spent on a bike, along with some other days that will be some of the best. Rick is super tough, and there's no doubt that he is capable of a challenge of this magnitude.
I'll post some pictures as soon as I get some. In the meantime here's a picture of the bike he's riding. 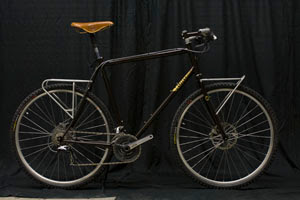 Posted by Hunter Cycles at 2:45 PM

Randi and I were laughing this morning about how Rick's messages have been the most entertaining of the bunch, "hurtin' for certain" and "legs say 'go go', ass says 'no no'." Only one hundred plus mile rides through heat, rain and snow can inspire that kind of wit; you can't write that stuff!

OK, so I am a little slow. But just last night it occurred to Mike that this is the perfect Hunter race. You need to deal with your own logistics and it could easily be called the Countryline to Countryline. Did Rick make the trophy...?

i will hava juicy steak waiting for Rick.

Send me an email and get my contact info so if rick needs some help at the NM end, I can see what I can do:
tas at tariksaleh dot com.

I am following closely and rooting for Rick...