We had great turnout yesterday for some single speed suffering with over 75 people lining up at the start.
The tracks were torture, the beach was exhausting, the weather was downright hot and the views were beautiful.

Here are the brief results.

George Hope and Dan Harting sprinted for the finish at the Pajaro river, and the general consensus is that they tied.
They decided to share the trophy even though we really wanted them to have a hotdog eating contest for the tie-breaker.

Allison Baumhefner took home the trophy for the ladies. She's one tough girl.

Here's a photo from the start. (it looks very similar to the one in the last post) We managed to cause quite a traffic jam on highway 1 there for a while. 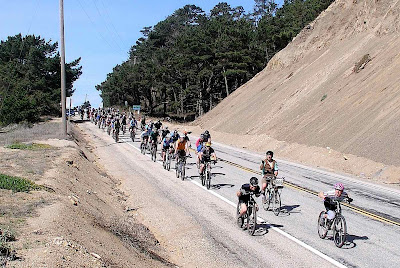 We'll write more later, right now we're still too tired.
Send us photos if you have them, we forgot our camera!
Posted by Hunter Cycles at 7:34 PM

Excellent photo. It could have been a Santa Cruz single speed race from any point in the last couple of decades if you ignore the occasional boingy fork, I can smell the sea air.